As a computer-musician and record producer, I have enjoyed the benefits of the steadily advancing technology that exists in our modern world. In just the past three years (since I started graduate school), I have seen a marked evolution in the products and software that makes the business of creating music almost too easy.
I guess it is a sign of the times, but I've been thinking lately about our trip to New England. Big D. (my father-in-law) was given a Nintendo Wii by his sister Sally for Christmas, as well as a Wii-Fit balance and fitness board to go along with it. 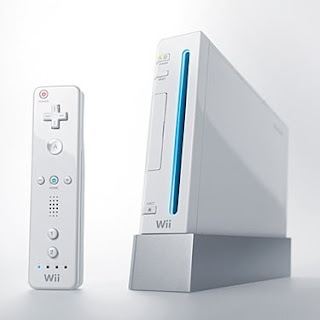 It was a blast playing the games and helping both my in-laws get set up to play in our absence (though I am still nursing some sore muscles in my shoulders). I was driving home from work the other day when an odd thought passed through my mind, 'I hope they're playing their video games!' What an odd twist of events for we, the Nintendo generation, to have such thoughts.
I also had to opportunity to help my mother to set up her iPod and iTunes so that she can put new songs on, and take certain songs off (sorry Postal Service... you've been cut!). Upon returning to school on Monday, many of the kids were toting new spoils from the holiday season. One particular student was brandishing a new pink iPod. Scrolling through the songs, she proudly showed me that she downloaded some of Mama Doni's music that we listened to in class. Chanukah has passed, but I thought I would leave you today with a new music video from Mama Doni, "The Funky Gold Menorah":

What a catchy and entertaining video! I like the word play as well- "holy guacamole" and more.

Hi! It's Mama Doni. I am so glad you enjoyed my music. Thanks for the great feedback guys. Stay tuned for some new songs for the next jewish holiday...PURIM!!

Great site, by the way. I love it!