Today I get to tackle a long overdue review for Trout Fishing in America's latest release, Big Round World. As is noted on their website, this album was a 2009 Grammy Nominee, so I'm not the only one who is buzzing about TFIA's music. 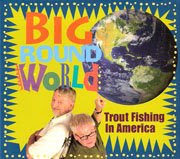 Cover Art:
The "earthy" theme and bright colors really got the kids' attention. "I really like the CD. It's shaped like the earth," one nine year old student noticed. There were some constructive suggestions from the students, however, "I like it, but it would have been a little better if it had little animals going around the world holding hands." I was excited to read that the packaging was printed with natural ink and the cardboard was recycled. This was noted by one ten year old girl, "It really goes with the album title because it is recycled." Towards the end of our review session, one student noticed Ezra's blue, dangly earring. This small detail split the group. Some, sadly, poked a bit of fun at Ezra, "By the way, nice earing." Although at least one student found it appropriate to the theme, "I like your earing. I think it is blue for the earth. All in all, the most frequent comment about the cover art was, "Colorful!"
Lyrics:
By now the children are used to listening carefully to the lyrics, and pick out songs and ideas that they respond to. "My favorite Jeans," was an instant hit. "They remind me of myself because I love my favorite jeans because I love jeans," was how one ten year old girl put it. One eight year old girl really responded to the theme of the album, "I think they make me think of saving the world. It's funny," she then put the word "hero" at the bottom. This may tie in with the "Martin Luther King and Rosa Parks" song. Another, younger classmate simply wrote the letters "M.L.K." in giant letters across the page. She also commented, "It reminds me of Obama." One song left one nine year old scratching her head, "I was wondering why the song "Five" is named that if it's number fourteen [on the album]?" The lyrics were definitely inspiring. In the words of one eight year old student, "I think the words are unbeatable."
Music:
Not surprisingly, just like Donny and Marie, the kids thought Big Round World was a little bit "country" and a little bit "rock and roll." I am always amazed at some of the ideas that the kids come up with, "It reminds me of a relaxing day and laying in the sun," one six year old noted. Another student though of "Canoeing down a river with a bunch of floating pants, LOL!" Perhaps she was referring to the "Favorite Jeans." Again, TFIA got some suggestions from the students,"It would have been cooler more if you had a loud bangy drum solo. I like the rock songs a lot! I wanted to dance!" I think the best summary of the album came from one six year old girl, "It sounds like Rock and Roll, and I'll tell you what Rock and Roll is!"
Influences:
One ten year old girl noted the blend of different styles of music on BRW, "It is Rock, Country and kind of Punk. Also, I love it." Coming from a completely different angle, her eight year old classmate said, "It reminds me of Ghostbusters." Now, I have to say that this comment took me by surprise. Ghostbusters? Wasn't that my generation? If you read the review of Mama Doni, you'll recall that my students have a strange fascination with "hobos," and one student's comment was "[It reminded me] of a hobo."
Age Range:
I would say the average response for who would like BRW was anyone from 2 to 100 years old. Some of the older students (the "tweens") felt they were a little too mature for TFIA and their age range was roughly 2-7. Still some got very specific in this section "6-21" or "3-40" or "3 months to 75 years." I did have two students write "5 to..." and then a 1 followed by countless zeros. "Do you think you'll live that long?" I asked. This lead one girl to suggest "From 2 until they die." A bit morbid, but I understand what she was trying to express.

The Mike Brady Wrap-up:
I was excited to do a review for Trout Fishing in America, since they have been one of my favorite children's group since my Massachusetts days. The musicianship and production of their music is impeccable! As a graduate from a small, liberal arts college in New England I am steeped in Folk/Rock, Hippie, Jam-bands. TFIA borrows from the best of this genre and adds their own spin.
I get such a positive and hopeful feeling from this album. The students really picked up on this. The themes of environmentalism and unity that are expressed capture the current zeitgeist of hope. No wonder, even the youngest students, thought about Obama. While others noted "Martin Luther King and Rosa Parks," is a perfect song to listen to during Black History Month.
From a production standpoint, this album marks the first time that Ezra and Keith recorded at the Trout House studio. They are also both credited as "producer" on Big Round World. To my ears, it has imbued the music with a unique personality and a clear sense of space. I can close my eyes and imagine the room where they recorded. I also appreciate that both members of TFIA are multi-instrumentalists and played most of the tracks themselves. I applaud Trout Fishing in America for this great album. They've been at it for 32 years and clearly still have got "it."
Kid Quote of the Day: "Look Mr. Nick, I made you quarter notes!" ~Francesca (age 3)

I like the cheerful lyrics and music. The Alarm clock song puts me in mind of Bill Harley in that it is a humorous slice of life for school aged children. I could imagine my preschoolers dancing with abandon to Big Round World. I like th use of bongos, too.
I am really impressed with the considerate reviews your students offered!