Greetings from the Bathtub. I am excited to present some new music for your consideration. After hearing a feature on NPR about Ziggy Marley (son of Reggae legend Bob Marley) and his new kids' music CD, I contacted his P.R. department and they were kind enough to send me a copy of Family Time: 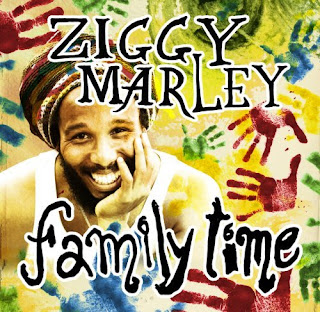 Ziggy has been making kids' music for a while now, most notably he wrote the theme song for PBS's Arthur cartoon. I've seen his name on several compilation CD's and before Family Time he did a remix album of his father's songs specifically targeted for the smaller set.
To my knowledge this is his first full-length offering of original music for kids' but I hope it won't be his last! I have to go back and reconsider my Top Ten Kids' Music Album list because Family Time definitely deserves a place of honor in the annals of Kids' Music. The comparisons between Ziggy and his father Bob are inescapable, but despite the uncanny similarity in singing voices, Family Time has a vibe all it's own. Those fans of traditional Reggae won't be disappointed though.
Family Time features some great collaborations with singer/songwriters such as Paul Simon, Willie Nelson, Jack Johnson and Toots Hibbert. Ziggy also teams up with some other big names in the kids' music scene such as Elizabeth Mitchell and Laurie Berkner, as well as other members of the Marley clan. The partnerships on the album seem so organic and well-suited, like old friends who got together to jam and Family Time was the result. I am partial to "Cry, Cry, Cry" and "Stand Tall" (which takes on new meaning when you consider the small stature of Paul Simon). Ziggy and Elizabeth Mitchell voices blend so well that I find myself playing "The Wings of an Eagle," again and again. Sadly, the duet with Willie Nelson is a bit underwhelming. The song "This Train" is a good tune, but for some odd reason they have Willie singing too low for the notes to carry. His usual relaxed, nasal-sounding delivery isn't there and to boost his grumbling notes they overcompressed his vocals such that only the consonants come through in the final mix. The duet with Laurie Berkner, "Future Man, Future Lady" is the only song on the album that falls short for me. I have to admit that I am a bit prejudice when it comes to Laurie Berkner. I like the sentiment of the song (saving our environment), but the music does speak to me like the rest of the album.
An additional feature of Family Time are two stories written by Ziggy Marley and read by Jamie Lee Curtis that complete the track list. It's been trendy for celebrities to pen children's books (thank you Madonna, Rosie O'Donnell, Maria Shriver and Jay Leno). Celebrity may mean that you can get an agent and a book deal, but it doesn't mean you're good at writing children's fiction. This is not the case with Ziggy and Jamie Lee Curtis, I have really enjoyed their work and the stories on this album have a great message and lyrical writing. Ziggy Marley really covers all the bases and presents a wide-ranging album that should please the whole family. 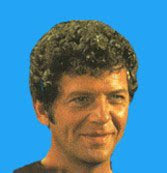 The Mike Brady Wrap-up: Ziggy Marley's music is all too often criticized as sounding just like his Dad, but not living up to his legend. For sure he's got some great big shoes to fill! With this album and his other kids' music ventures I feel that Ziggy is distinguishing himself from his father, and finding his own niche. In my experience as a performer, nothing gets the crowd moving like a Reggae tune. The vibe is perfectly suited for kids' song writing, and for getting the parents to groove along. I can't understate how much I appreciate and enjoy this album, and I bet you'll appreciate it and enjoy it too!
Kid Quote of the Day: "Hold on a sec." Henry stopped playing the piano and reached into his pocket, producing a garage door opener which he put up to his ear. He whispered inaudibly for a moment, covering his mouth and then replaced the remote. "Sorry, I got a call. That was someone who works. That was someone who works with people. That was my boss." ~Henry (age 4)
Posted by Nick! at 4:39 PM

I can't help but struggle with the juxtaposition of Bob Marley & Willie Nelson vis a vis children's music.

^^ click for images of what I mean. Not that I am saying Ziggy is guilty by association, but c'mon... and I'm not saying that's not a catchy tune, either! It's just... weird.

I play both Bob Marley (Three Little Birds) and Willie (On The Road Again) with kids often. I also play the Beatles (Yellow Submarine, Octopus's Garden, Twist and Shout). Lord knows that their history is sordid as well, but should we deny our children great music?

I strongly feel that there is a lot of music that is inappropriate for kids. I am, obviously, a proponent of kids' music, but I don't think kids should be limited to it. Historically (going back to antiquity), there has been a link between artists/musicians and substance abuse. It tragically takes some of the greatest (Michael, Jimi, Jim, Janice), but it is what makes a movie like "Ray" or "I Walk The Line" good drama. I'm not going to stop playing Ray Charles because of his past. Johnny's kids music has been featured here.

I am more disturbed by music like Hannah Montana and the Jonas Brothers which is marketed specifically to kids (little girls), and is about love, romance and veiled sexuality.

Yeah, I'm sure I agree overall. The LAST thing I'd want to do is deny anyone fantastic music (i.e. the Beatles). I just can't get 100% behind it, more like 95%. There's always just that one little thing in the back of my mind. Hopefully by the time the child finds the Willie Nelson reggae album they're old enough to understand. BUT - that's an age-old, life-long, never-ending problem.

Having read this thoughtful exchange...I am definitely in favor of protecting children, but I am anxious to give this music a try. I agree that it seem more harmful to have children listen to music supposedly geared towards them which exposes them to veiled sexual references, commercialism and more. I see our 4 year olds wiggle suggestively while referencing Hannah Montana. Anyway, if Bob Marley Willie Nelson and other good musicians with questionable pasts create truly excellent music for children, as Chris writes, hopefully any questions about that from the children will come much later. It sounds exciting!

I forgot to comment on Henry...He seems to have a future in the business world! Cute!
Love,
Mom

I finally had the opportunity to watch Ziggy Marley's Family Time, and it's delightful! Catchy music and joyous video - and multicultural, too.