The Best Laid Plans of Mice and Men

Greetings from Singing in the Bathtub! This edition marks the first of many album reviews that will grace the pages (or screens) of my blog. It is with great pleasure that I kick the reviews off with The Hipwaders most recent release Educated Kid. 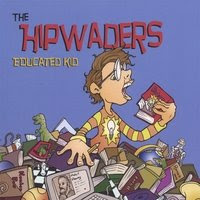 Let me start by explaining the title of this posting. I had one gem of a plan for reviewing albums in my classrooms. It was so simple and thought out, it could only fail in historic proportion. As a veteran teacher I can tell when a CD is a hit in my classroom. I recall many kids requesting their favorites and singing along or sitting with their ears literally pressed to the radio when a special CD was played. I can also recall when a certain CD was not making the grade, and the little critics would be vocal in their distaste.
What I failed to take into account is the "broccoli factor." They say that a child might need to be offered a certain food 10-20 times before deciding to try it (think broccoli), but then they grow to love it. Music can be the same way, especially in a classroom where chatting with friends wins out over a listening activity. There were some focused participants and I managed to get a pretty decent review.
Despite a luke-warm response to the process of critical listening, I presented the Hipwaders music to both my preschool and K-5 afterschool groups. Any parent who has asked their children, "What did you do today in school?" only to hear a one word answer, "nuthin'," can imagine the types of single word responses that I got when it was time to take down our thoughts. The K-5 kids did start to get excited when I told them about the blog and their part in the review. As for the little ones, they were happy just to dance and there's a tacet, but striking endorsement in itself.
Cover Art
We listened to both Educated Kid and the Hipwader's self-titled album, but for the sake of time we focused on the former. I asked everyone to look at the album art before listening to the music. The preschoolers were giggly and enjoyed the silliness of the image of the "Educated Kid" eating a book. Surprisingly, some kids in the older crowd took a strange offense to the idea. "I really have to tell you the truth," wrote one concerned 9 year old, "If you want to make the cover for kids, you should not put a person eating a book." I tried to explain the humor, but it was lost on her. Several other kids noticed references from the song titles (like the "Cat in a Bathysphere"), and  one 11 year old reported that "There are a lot of details. When you first see it, it attracts your attention."
Music
Once the CD was playing, both the older and the younger crews enjoyed the music. The Mix of little kids and disco usually elicits spontaneous dancing. Thusly the first cut, "Turn up the Radio" was well received (and the one hook that some of the kids left humming). I asked the older group to comment on the music as a whole. One 9 year old girl said, "I love how the beachy rhythms and the lyrics are just like my life. You rock!"
Lyrics
I also asked them to report on the lyrics. "It is so good, I feel like I am in the audience looking at you sing!" wrote one 8 year old. "The words are chosen very well. Children can understand. It Makes Sense," a 5th grader told me.
Influences?
I was curious to know if the kids had any thoughts on who the Hipwaders reminded them of. I got a lot of Beatles references (though, I think that for some of them, that is their stock answers... it could be worse). One 5th grader wrote down "Dr. Seuss." Another 9 year old student thought of other kids' acts like, "The Imagination Movers on Playhouse Disney and Mr. Nick (that's me) when he is playing his guitar."
Age Range
The general impression from the older group was that anyone from 4-10 years old might enjoy these albums. My impression from listening to it with the younger ones (2-4+ years old) is that they loved the beat and the music, but the lyrics, for the most part, didn't capture their young imaginations.
The Mike Brady Wrap-Up:

Here's where I chime in with my 2 cents. I enjoyed both albums from the Hipwaders, but Educated Kid is by far my favorite. Both albums have a surf-rock foundation that I found fitting coming from Cali. From a production standpoint I liked the denser textures on Educated Kid (cool synths and sound FX). I also found that E.K. had more "hookey," singable tunes (picture me singing "This is the History of Decalan Rae").
My introduction to Educated Kid was through the YouTube video for "Paleo Pirate" in the last edition of Singing in the Bathtub. The song stands as a nice contrast to the rest of the guitar rockin' tracks on the album (with it's waltz tempo and mandolins a la Peter Buck). I did enjoy the video and don't want to overstate the Dino/Person issue mentioned before. I applaud songs that explore creativity and fun juxtapositions, and once you start holding up scientific standards to kids' music we're all in trouble (Sorry folks I've never been on a spaceship ride to the planets!). My real pet peeve is with cave men fighting dinosaurs and such. I enjoyed the use of Playmobil (a beloved childhood toy... I had the pirate ship), and the young stars of the video.
Nice work Hipwaders! If you're ever in the South Florida area, we'll have to light up the town until nap-time. That's it for now from Singing in the Bathtub. Stay tuned...
Concert Updates!
Nick and/or the full In The Nick of Time line-up will be appearing at a number of up coming Hollywood FL area family events:
Friday Family Fun Night- October 3rd, Anniversary Park, Downtown Hollywood, 5-9 pm (details on time and location to follow)
Family Health and Safety Day- October 12th, Arts Academy and Harrison Blvd., all day!
The Witches Ball- October 31st, Arts Park, Downtown Hollywood,  7-10pm
These are all Free events!
Kid quote of the day: (when asked about a male classmate's absence) "Oh, he got sent home 'cuz he got dice in his hair." ~Fiona age 3

What great reviews from everyone! Obviously older children are more verbal in their responses, and I was impressed with their keen observations. This was very entertaining.
I hope we don't get dice in our school this year!