I am declaring today, Singing in The Bathtub Game Day. I need some kind of distraction from the "other" game that's going on today (sorry Pats!). After some successful afternoons of playing the following games in my classrooms, I've decided to share the fun with my readers. I invented each of these games to help teach a specific musical concept. These two games are best for K-5th graders, though with the right group, you could try these out in preschool.
Hide The Whole Note:
A hide and seek game similar to "Hot and Cold," exploring the concepts of tempo and dynamics.
Needed supplies:
-A ping pong ball with a whole note drawn on it (using a sharpie marker).
-A bucket of percussion instruments (one for each player) 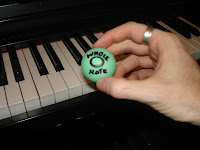 In this game there is a Whole Note Hider and a Whole Note Hunter. The other players are on hand to help direct the hunter when they begin the search. The hider does what one might expect, hide the whole note ball somewhere in the room so that, at least part, is showing in plain sight. Obviously the hunter must cover their eyes and put their head down while the note is being hidden. 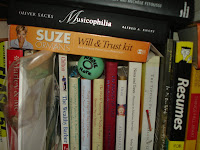 Once the hider has returned to their seat the hunt begins. As the hunter moves through the room the other players play a beat with their percussion instruments. As the hunter gets closer to the whole note the tempo is increased, as they get further away the beat slows down. Once the whole note is found the hunter becomes the hider and the game moves on to the next player. I typically rotate the instruments on each turn so that each player gets each instrument (this saves on arguments over who plays the cymbals etc.). I end the game with the first hider taking a turn as the hunter so that each player does each role.
This game is best with 5+ players. You could play with as few as 2 but it's not quite as fun. It can get pretty wild with larger groups, so I often introduce the idea of dynamics so that when the beat slows it also gets quieter and louder as the tempo increases. This can give you ears a bit of a rest.
Pass The Beat:
This is a game similar to "Hot Potato," which tests the players' ear for rhythm.
Needed Supplies:
A shaker egg (or other percussion instrument that can be safely tossed) 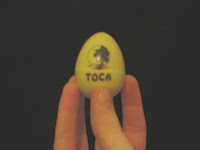 This game is started by forming a tight circle in chairs or on the floor. One person is selected to start the beat and pass it on (I typically start the game off to show how it's done). To set the beat the first player holds the egg in one hand and taps out a rhythm on the other, open palm (this provides a much clearer beat than merely shaking it in the air). The beat needs to be roughly one measure long, but no longer or it's too tricky.
The player calls out the name of the next player they intend to pass the beat to (as a warning), and tosses it into their lap. This new player must mimic the beat exactly or it can be stolen. If the new player doesn't play the beat correctly it is open to the floor for a steal. A player steals by correctly clapping the beat, and is then given control over the egg and the beat.
I tend to suggest that you must pass the beat to someone who hasn't had a turn until the whole group has played, then it's open to choice. It's important that the player doesn't stall between playing the beat and choosing the next player. I will often give a 3-2-1 countdown to encourage a swift pass. This one can be played in pairs and large groups, or even as an elimination game leading to an ultimate champion.
So there you have it. I hope you enjoy these games. I know we do in my class. Until next time, that's all from Singing in the Bathtub!
Kid Quote of the day: "This is my doggie, Egg On The Ceiling." ~Julia (age 3)
Posted by Nick! at 7:37 PM

Neat games! We might be able to play the second one with a small group of 4 & 5 year olds. We, too, rotate instruments so that we don't have children obsessing about not getting a turn with their favorite instrument. Usually we do the old "You get what you get, and you don't get upset." but this is one instance in which it's easiest to give turns. Thanks for the good sugestions!