Today I am excited to finally be reviewing one of my favorite new kids' album, Funky Kidz. This compilation album is the brainchild of executive producer Lauren Busch Singer. She gathered some of New Orleans' top artist and groups and had them record classic children songs with a modern and decidedly "Funkified" sound. 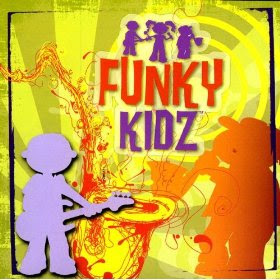 Just listen to this list of top- notch bands and musicians: Bonerama, Big Sam's Funky Nation, Ivan Neville's Dumpstaphunk, Papa Grows Funk, Paul Sanchez, George Porter Jr, Theresa Anderson, The Radiators, Walter "Wolfman" Washington, Johnny Sketch and the Dirty Notes, Ingrid Lucia and Amanda Shaw.
With this type of talented, veteran musicians working on the project it's little surprise that Funky Kidz is flawlessly performed, meticulously produced and a joy to hear. Put this album on, and it's an instant dance party. By sticking to classic kids' material (lots of Disney, Wizard of Oz and Folk classics like "Froggy Went A Courtin'"), even if you aren't familiar with all the bands on the album you'll be singing along the first time you hear it.
As the title of the CD might suggest, the music is  funky and upbeat, but more specifically the vibe is less James Brown funky and more New Orleans funky. To me the New Orleans sound is typified brassy horn parts, call and response vocals, and that unmistakable  "joie-de-vivre" that turns even a funeral in New Orleans into a big-band celebration.
Where this album missed the mark for me are some of the down-tempo numbers. Tracks like "Somewhere Over the Rainbow," and the "Garden Song," seem a bit out of place with the rest of the material and are not my favorite renditions. As an educator, I also bristle a little at intentional misspellings (i.e. Kidz). I know it ties in with the funky, inner-city culture, and the tendency for kids' products to have cutesy, misspelled names, but I think kids' music has the ability to educate as well as entertain.

The Mike Brady Wrap-up:
Without the kids' perspective, having the "Mike  Brady Wrap-up," seemed a bit unnecessary, but after my last review of Ellis Paul I really missed this tradition. So, I am bringing it back.
If you and your family enjoy listening to music together, getting down and dancing in your socks and singing along to some of your favorite songs that you remember from growing up, this album will be a sure hit! Sadly, you can't go see Funky Kidz play live in concert, so do yourself a favor and get the CD!
Kids' Quote of the Day: "So tell me what your favorite song is," Nick asked his elementary music class. "Soldier Boy" called out Zion (age: 10). "Alright, let me write that on the board... S-O-L-D-I-E-R," Nick replied. "No, Mr. Nick you spelled it wrong," added Curtis (age: 10), "It's spelled S-O-U-L-J-A."
Posted by Nick! at 11:54 AM

This sounds like an awesome CD. I may have to see if Miles's uncle can hook him up with some Funky music. :)

I can't wait to have a few minutes to preview it. Once I do, I will call it to my families' attention. It sounds great!
Also, so true about the misspellings. I think anything in regards to children - music, signs, school names, literature has a responsibility to spell words correctly and use proper English (unless using a vernacular/slang for a particular purpose).

I had a chance to listen, and it's a catchy collection. My favorites are "If I Only Had a Brain" and "Froggy Went a Courting" The "Garden Song" was not my favorite because it's a song we love at school, and this rendition renders it nearly unrecognizable. I will alert my families to an enjoyable CD.
Thanks!