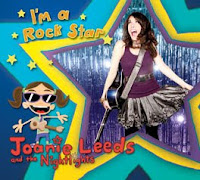 Today I've got some rockin' good music for my fellow bathtub singers. I recently received a copy of I'm a Rock Star by Joanie Leeds and the Nightlights. In this small world of Kids' Music, it turns out that Joanie was roommates with a close friend who studied Musical Theatre with Joanie at Syracuse.
This is Joanie's second album for kids. Like many artists who wind up in the kids' music genre, Joanie did her time in NYC club scene. She is still performing and recording music for adults, but she seems to have been bitten by the kids' music bug (possibly while working for Gymboree in Manhattan).
I'm a Rock Star lives up to it's name. It's rockin' and current sounding. The songs have a young, fresh perspective that, to me, conjures thoughts of American Idol. Not because the singing is amateur, Joanie has a powerful, well-trained voice, but because it has that unmistakable pop sound that makes A.I. so popular. You can hear hints of country, blues, jazz and latin music blended with a hearty dose of pop/rock. Joanie even riffs on the classic Christopher Walken catch phrase with her tune "More Cowbell."
Lyrically, I think Joanie has done a good job tapping into the minds of school aged kids. There is humor and imagination is songs like "It Was the Elf" and "Popcorn." There is a sweet side to this album as well. "Give Me a Hug" and "Put a Little Smile on Your Face," can tug at your heart strings.

The Mike Brady Wrap-up: The one thing that writing this blog has shown me is that the world of kids' music is vast and full of great albums waiting to be discovered. I'm a Rock Star is my first introduction to Joanie Leeds and the Nightlights. This "City Kid" is making a name for herself in the Big Apple rockin' out with the kids by day and moonlighting as a Singer/Songwriter by night. You can hear this in the songs on I'm a Rock Star she knows what parents want and delivers it in a way that it exciting for kids. It was fun listening to I'm a Rock Star, and I'm sure you'll enjoy it too!
Kid Quote of the Day: "I didn't mean to stick the bean in my nose, it just kinda went up there." ~Will (age: 3)
Posted by Nick! at 1:10 PM

Wonderful new discovery, and isn't it a small world!?!
I hope the nose bean came out...My Dad used to be called upon regularly to remove beans and other small items from children's noses and ears!