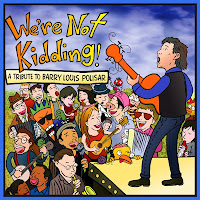 Since childhood, Barry Louis Polisar has unexpectedly popped up twice in my life. As I had mentioned in my 2008 post Top Ten Kids' Music Albums of All Time, I grew up listening to Barry and recall borrowing his albums from the local public library in the early 80's. I enjoyed his gross sense of humor and his wacky, imaginative story-telling.
So, I was surprised and taken aback to hear Barry Louis Polisar during the credits of Juno around the time that I posted the original Top Ten. Recently, I received an email from the man himself in promotion of We're Not Kidding! a collection of 60! (I'm not kidding) covers of Barry's music over the past 30+ years.
Word about Singing in the Bathtub has been getting around. I receive submissions each week and I have built nice relationships with many different publicists and P.R. managers, but it is rare to have an artist contact me directly and spend the time to communicate back and forth about kids' music. It's hard for most people to understand my interest (obsession?) in kids' music, but I sort of felt like one of the Beatles dropped me a line.
I looked back into Barry's collection of music before the CD arrived so I had a good reference of the originals. I didn't realize that his collection goes back to 1975! I also didn't realize at the time how much Barry reminds me of the master songwriter/storyteller, Bob Dylan. For the uninitiated to Barry's music, it's like a bit of Bob and a bit of Shel Silversteen, but I don't want to sell him short by pigeon holing him. Much like the recent I'm Not There Soundtrack Album sent up tributes of Bob Dylan. A giant cast of musicians has come together to make We're Not Kidding!
To be honest, I initially didn't recognize any of the band names on the roster. That's certainly not due to lack of talent. The various styles, interpretations, and genres that are covered on this 2 CD set are vast and at times dizzying (in a good way... think of kids' spinning). Everything from rockabilly, techno, jazz, alt-country to klezmer with full yiddish translation. You name it, and it's probably on there.
In our back and forth over email, Barry and I discussed the kids' music scene these days. He reflected that, most kids' music is for preschool children and by extension they're parents (myself included). Barry's music definitely has a more mature sense of humor and appeals to an older crowd. The musical sophistication on We're Not Kidding! is a bonus for those growing brains.

The Mike Brady Wrap-up: Tribute albums are a unique thing in the world of music. It's easy to assume that a tribute album is only for the die-hard fan who sees the subtleties in different interpretations of classic songs. I would say that even for folks who are not familiar with Barry Louis Polisar's work, We're Not Kidding! is a great way to be exposed to his collection. The styles run the gambit, so you may not be into every track, but there are a lot to choose from. 60 tracks from any artist is a lot to take, so having various musical genres juxtaposed keeps it interesting and fun. As a teacher or a children's musician it's hard to watch the generations age and grow out of your range, but for an artist like Barry Louis Polisar he is now performing for children of his first generation fans. Any one of them will love this modern eclectic take on the veteran's work.
Kid Quote of the Day: "Happy Birthday Quinn!" I called as I exited her party. "Happy Birthday!" ~Quinn (age: 3)
Posted by Nick! at 12:43 PM

I've been a super fan of his since I was a little kid and saw him play in Maryland in 1985. My brother and I used to sing and act out his songs. We had ALL his vinyl albums and I learned every word and can still sing them to this day. His music is so fun and very different from everything else out there. I'm glad to hear that his work has been recognized on a compilation cd, it's well deserved. Thanks Barry, and keep those songs coming!

It sounds like a great musical adventure for the older crowd, and how satisfying to know that new generations are being introduced to Barry's music. Here's to more serendipitous encounters, Nicholas!

I have a cute quote for you...
We were eating birthday popsicles with our 4 year olds, and the pop sticks had (lame) riddles on them. It's always agonizing because the riddles go way over the heads of 4 year olds, but they insist upon having them read to them. So...the riddle said: "Why was the bad baseball team so hot?" the answer was: "They didn't have any fans" The kids looked kind of blank before Henry, age 4 piped up:"Of course they didn't have fans. There are no plugs!"

Hey! Where can I hear the full version of My Name is Hiram Lipshlitz Jr.?

I have the CD Naughty Songs for Boys and Girls and the track is just listed as My Name is Hiram Lipshlitz with no Jr at all. Can you please write and let me know what the lyrics are to the longer version?