Greetings fellow bathtub-singers! Today I am proud to announce Singing in the Bathtub's first concert review. Tracey and I were lucky enough to catch Dan Zanes and Friends at the gorgeous Adrienne Arsht Center in downtown Miami. 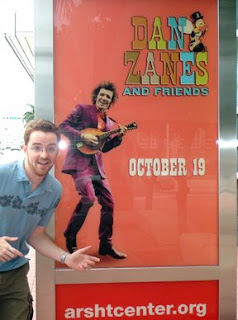 I missed his last visit to Miami, but I recall the kids showing up at school with T-shirts the next day. Dan Zanes made reference to this concert at the beginning of the this Sunday's show, and I tracked down a little YouTube clip which illustrates why:
There was no onstage, toddler moshpit at the end of his performance this time around, but there was a healthy crowd bopping along down in front or resting their chins on the edge of the stage.
I always love to see events at the Arscht Center (and the Knights Auditorium where Zanes et al. played). The buildings are beautiful inside and out. The stage and setting are great for everything from Comedy (we saw Kathy Griffin a few years ago), to Broadway (we caught "Celia" the biography of Celia Cruz on the first leg of it's tour), to Family Music like Zanes and Friends. Miami is a perfect local for Dan Zanes to debut music from his latest Spanish Language Album, "Nuevo York."
Tracey and I were up in the third tier balcony, but we were near the front and as a performer and live sound engineer it was a good vantage point to check out their set-up and see how they negotiated the sea of cables that keep everyone connected. By my mark, the group of multi-instrumentalists covered the Electric and Acoustic Guitars, String Bass, Banjo, Mandolin, Violin, Trumpet, Spoons, Recorder, Drums/Percussion, Accordion, Harmonica, Ukulele, Tin Whistle, Melodica and not to mention, everyone sang.
I have to admit, I was totally jealous of Zanes' amazing and dynamic band. It's a group effort in the truest sense of the word. Every performer had a chance to sing lead, the front line often swapped instruments between songs, and no one played just one instrument over the course of the show. Dan Zanes is the hipster-star of the show, but he gets by with a big help from his "Friends!"
I love to play the influences game, and I was sensing an ample blend of Bob Dylan, Pete Seeger, Norah Jones, The B-52's, and even a bit of Hendrix (towards the end, Zanes played his electric guitar behind his head a la Jimi). If Bill Harley sounds a bit like Steve Martin (when you close your eyes), Dan Zanes looks a bit like Martin and even has the banjo. Zanes presents a nice blend of Folk, Old Tyme, Rock n' Roll, Latin and Zydeco. Much like Pete Seeger, Zanes is a collector of traditional songs from around the globe. In this sense his, "Family Music" is just the newest branch on the old Folk Tree.
Where a Dan Zanes and Friends show misses the mark in my opinion is in Zanes' onstage banter, which is directed almost entirely to the adults in the crowd. It's more of a missed opportunity. Zanes had the crowd right at the foot of the stage with their chins on the edge and yet he seemed to be addressing the balcony. Playing traditional, grown-up Folk music can also bring up some questionable themes (like the sinking of the Titanic, or debt collection in Pay Me My Money Down). I guess the same could be said for Ring Around the Rosie!
All in all it was a great show. I would rank Dan Zanes and Friends with some of the best live performances I have seen (Family Music or otherwise)! I love to see talented, energetic performers inspiring the very young with quality music. Don't miss them when they come to your town!
Kid Quote of the day: "I just saw Dan Zanes play! Who did you see?" ~anonymous boy in the elevator (age ~5)
Posted by Nick! at 7:22 PM

That sounds wonderful! I am envious. I imagine my kids would love to see him/them as well. Thanks for a detailed and entertaining review.