I Met The Mayor!

Well, Funatstic Friday was a big hit! I set up in the newly refurbished Anniversary Park and played for a throng of kids and parents. They blocked off the entire street, set up a moon bouce, and hosted clowns, magicians, local venders and Yours Truly! This will be a bi-monthly event and I was invited back indefinitely (perhaps I can convince the city to pay me next time)!
I did sell a few CD's and pass out a few cards, and hopefully reached a new audience outside of my school, The Arts Academy of Hollywood. Because I was the only one with a P.A. I was responsible for making announcements (and helping lost children reunite with they're folks). I did a lot of plugging for the venders, the city and for the movie that followed my set "Shark Boy and Lava Girl." I hope that the powers that be recognize my contribution!
On an exciting note, I did get to meet the Mayor of Hollywood, Peter Bober. 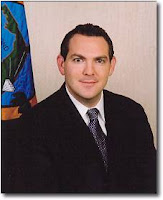 I have to admit that, at first, I thought he was an interested parent. He is very young, attractive and dynamic in person. He's the first public official to praise me for my work, and I don't take his endorsement lightly. I was also photographed for one of the local papers. Hopefully I'll get some press out of the deal. So that's the story for this evening. October is turning out to be a very busy month for me and In The Nick of Time. It's great to be back in the swing of things!
Kid Quote of the day: "You're almost as good as the Jonas Brothers," ~ Anonymous Fan
Posted by Nick! at 10:24 PM

That sounds great! What a great service for families with young children, too. Meeting the Mayor and being compared favorably to the Jonas Brothers are definitely feathers in your cap. It all sounds worthy of pay for certain! Here's hoping.