I've been a bad blogger. Several wonderful musicians have sent me submissions for review, and I put them off due to visitors, school graduations and moving the In The Nick of Time home office. Today I am going to do something never done before at Singing in the Bathtub...
The Album Review Trifecta! 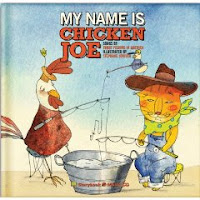 My Name is Chicken Joe ~Trout Fishing in America
This CD/Book set from, friend of the bathtub, Trout Fishing in America, was sent to me by their literary agent soon after my review of Big Round World. It's a first for the TFIA guys, having an illustrated book along with the CD.
The story and title song are a whimsical addition to the  TFIA catalog, with oddly mismatched character names and an almost Spaghetti Western feel. The art work is a nice match for the humorous imagery of TFIA's lyrics. The rest of the album is a collection of greatest hits (some of my favorites including, "Fill It Up," and "It's a Puzzle").
These guys have been at it for decades, and they continue to break new ground and expand their audience. Cheers to Trout Fishing in America for this lovely Book/CD set. 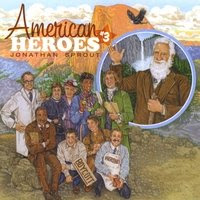 America Heroes #3 ~ Jon Sprout
I was turned on to Jon Sprout by Lauren Busch Singer, the mind behind Funky Kidz. As I mentioned in one of my last posts, Jon Sprout has the best name for a kids' artist in my opinion.
Any American History teacher would do well to have the three current volumes of American Heroes CDs. To my ears, Jon Sprout's music has the thoughtful and narrative quality of a Broadway musical.
This is the third in the series, so the list of heroes doesn't include Washington or Lincoln, but some important figures none-the-less, Wilma Rudolph, George Washington Carver, Cesar Chavez, John Muir and Pocahontas to name just a few. This CD is obviously for the older crowd, and has great educational merit to go with the enjoyable, evocative music. 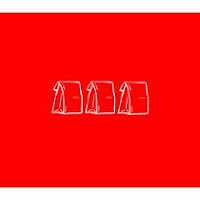 Field Trip ~ The Recess Monkeys
I am always surprised when I come across bands like the Recess  Monkeys that I have never heard of before (even just in passing). It's a reminder of how local the kids' music scene is.
This Seattle trio has a nice catalog of music, and this recent release is the culmination of years of working in the kids' music world. They are prolific writers and seem to turn out 1-2 albums a year for the past few years. I haven't had a chance to sample all of their other music, but I certainly will after hearing Field Trip.
(*sidebar*) I find it funny that "High School Musical" is really most popular with the Elementary School crowd. If there really was an "Elementary School Musical," I would nominate the Recess Monkeys to write it. As school teachers, they have captured the experience of living through that period of field trips, play forts, math class and yes, even head lice! (p.s. I was that "red-headed kid from soccer" ...listen to the CD and you'll know what I mean).
The music is catchy and beautifully produced. The album on a whole looses steam towards the end, but there are many memorable hits on this album. Who knows, you might just wind up having to explain why your singing a song about lice to your mother in an elevator (like I did).

The Mike Brady Wrap-up:
As I type this the seasonal, Miami rains are pounding my patio just outside. For many kids this summer, who will be indoors on rainy days, or subjected to long car rides to vacation destinations, any of these three CD's would be a great companion!
All three of these groups/artists have been honing their craft and putting out fine music for young listeners. Whether old favorites, or new discoveries, there is a lot of great music out there to add to the soundtrack to your summer.
Kid Quote of the Day: "Could you count to a google-plex in your lifetime?" Luka (age 7). "No, but maybe a billion if you didn't eat or sleep for 30-40 years," I replied. "Pretty boring life!" he quipped back.
Posted by Nick! at 2:49 PM 2 comments:

Greetings fellow bathtub singers. It's been almost a month since I have posted, and with a little bit of time this afternoon, I figured I needed to dive back in before the motivation is gone.

Recently, I have been reading a book called Street Gang: The Complete History of Sesame Street by Michael Davis. When it says "A Complete History," they are not joking. I am 200 pages in and the first episode only just aired! It's been tough to get through the first few chapters, but I have gained a new sense of respect for what went into creating this, now, archetypal show.

It has gotten me thinking about a myth in the world of kids' music, one which I, myself, have perpetuated. "Young, upstart, children's musician turns the world of kids' music on it's head by writing popular music that both parents and children enjoy together," it's a common theme in human interest pieces on the latest and greatest new kids' artists. I have heard everyone from Ralph Covert, Steve Songs, The Recess Monkeys, The Jimmies and Dan Zanes described in this fashion. I even bought into this myth and marketed myself accordingly.

The fact is, that's just not true. The first episode of Sesame Street aired in 1969, and the music was ground-breaking! Joe Raposo and Chris Cerf have been doing rock and roll kids music since the Woodstock days!

We, the new-wave of kids' artists aren't doing anything extraordinary or fresh for that matter. For every Raffi, Barney, Greg and Steve or The Wiggles who have come on the scene with their sanitized, syrupy sweet brand of kids' songs, there have been folks like Raposo and Cerf, Bill Harley, Johnny Cash, James Taylor, Billy Joel, Stevie Wonder and Paul Simon (just to name a few) who have made recordings for kids' without compromise.

I have always tried to pay homage to my influences. That is one of the biggest missions of Singing in the Bathtub. I guess I need to be honest with myself, my music isn't ground-breaking. It isn't going to turn the world of kids' music on it's head. My goal is the same now as it has always been, make music that is fun and that I like as a grown up then write words that will enthrall, entertain and inspire the smaller set.