Trust me, Kids do say "The Darndest Things"

We here in the Bathtub are saddened to learn of the passing of Art Linkletter. His iconic television program, "Kids Say the Darndest Things," pioneered the concept that children have a unique and humorous point of view at a time when children were expected to be seen and not heard. Faithful readers will recall the Ernie Ford video I posted a month ago. His nose-pinching disapproval of his young, scene-stealing friend is in stark contrast to Art's genuine interest in what "Art's Kids" had to say (I'll even forgive him for the backwards "S" which, as a teacher, makes my spine tingle). There would be no "Kid Quote of the Day" without Art. He will be missed!

Kid Quotes of the Day:

I Don't Think Einstein Was That Great of a Musician

I have never really been a fan of the name "Baby Einstein." Shouldn't it be something more like "Baby Beethoven?" I guess the Einstein reference is a veiled suggestion that it will make your baby smart. Recent research showing the negative effects of TV on infants also sort of negates the "Baby" part as well. What I do like about Baby Einstein is that it exposes young children (of appropriate age) to classical music. I've had many surprising moments in lessons where a child will pull out a bit of musical knowledge cited from Baby Einstein.
Classical music is fading from our culture. It is challenging, and often expensive to stage, but sadly misunderstood by many and not valued as it should be. That is why I am happy to review a new CD from the guitar and flute duo Keith Torgan and Barbara Siesel.
Green Golly & Her Golden Flute 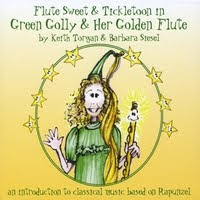 performing as "Flute Sweet and Tickletoon" Green Golly and Her Golden Flute is part fairy tale part classical concert. The first half is the beautifully told/performed tale of Green Golly and her golden flute. The tale is loosely based on Rapunzel, and both Torgan and Siesel have a delightful and dramatic delivery. The various classical melodies that are woven through the story are sweet compliment to the dialog.
As for the second half, the CD also contains ten tracks of wonderfully performed classical selections adding Jessica Krash on the piano. It's a varied and engaging selection of pieces. Siesel's flute playing is sweet, but this is not a CD of lullabies. Tunes like "Flight of the Bumblebee," and "Habanera" add a bit of excitement and showcase some fleet fingering from both Krash and Siesel.

The Mike Brady Wrap-up: Studies may show that infants watching DVD's like "Baby Einstein" has a negative effect on brain development, but it is never too early to expose your children to the joys of classical music. It might be going overboard to put earphones up to a pregnant belly, but playing a lovely album like "Green Golly and Her Golden Flute" for your little ones is a great idea. The selections range from the well known to the more obscure, but they are all enjoyable. Even if you are not knowledgeable about classical music, this CD is an easy choice.
Kid Quote of the Day: "Why do I have to learn cursive when I'll never use it after 5th grade?" ~Luka (age: 8) to be honest I had no good response!
Posted by Nick! at 12:37 PM 1 comment:

It's taken me a week, but I am finally sitting down to write about Kindiefest. For the uninitiated, Kindiefest is a festival/conference for the Kids' Music industry. Kindiefest kicked off last Friday in Brooklyn NY. I flew in from Florida and stayed with my good friend Jess just a few long blocks away. From the perspective of a review blog author, I was excited to meet many of the people I have reviewed over the past 2 years. Recess Monkey, King Pajama, Bari Koral, Bill Harley were notable attendees who I was able to strike up conversation with. From the perspective of an upstart performer and fan, I was in heaven soaking it all in. I can sum up my impressions of the event in Five Short Articles about Kindiefest:

Not Kindlefest, not even Kidneyfest... it's Kindiefest!
The first time I made mention of going to Kindiefest online (probably on Facebook), someone responded asking "What's Kindle-fest" which conjured up images of people huddled together to read ebooks. I often have to explain the Kid-Indie music origins of the festival's title. Justin Roberts' band had a similarily humorous take:


The general concensus between other artists at Kindiefest was that there is no good term for the type of music we make. Kids' Music, Children's Music, Family Music or heaven forbid, Kiddie Music! None seem to quite fit. Which brings us to article 2...

A High School Dance With a Bar
The conferences were a great resource to budding artists, but I was really there to meet people, so the first evening's mixer was great. Dan Zanes encouraged people to butt into conversations and meet everyone. This was a trick as the lobo solo in the crowd. I felt a bit like I was at a high school dance and everyone grouped up like old friends. Thankfully, unlike a high school dance, there was a bar and that was the best place to meet people. Nothing to do but wait and chat. By the end of the night doing the "Dan Zanes Butt-in" was easier to do. 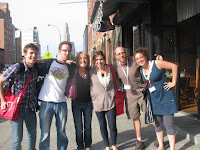 Summer Camp Friends
As a long time camper/counselor, I am familiar with the phenominon of summer camp friends. You show up to camp with a blank slate, you meet new people and make tight bonds and then get packed up and head home for the fall. Thankfully, there is Facebook so I don't have to send them a chain letter, but I met a lot of great friends in the industry. Next time I attend Kindiefest, I'll be hoping to see my good ol' summer camp friends like Splash n' Boots, King Pajama, Stacey Peasley, and Tim (and the Space Cadets)

Kids' Music for Adults
Originally, I had hoped to get In The Nick of Time on the roster for the Saturday showcase. It wasn't in the cards this year, but perhaps in the future. It was a funny sort of thing though. I was excited to see folks like the Hipwaders, Rhythm Child and Justin Roberts, but is was a kids' music show for adults, and not only adults, but industry folks. Nerve racking as it must have been. It was a great show. I was especially fond of Mr. Leebot whom I had not heard of before (from Austin TX). Sunday's festival performances were also great, but I missed some so I could get on a plane and fly back to my dear wife and sweet little dog (plus all the school chidren expecting to see me bright and early the next day).