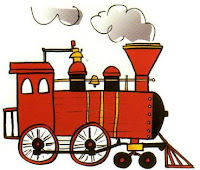 Conducting a typical 20-30 minute music lesson for a preschool class requires more stamina, mental focus and creativity than many people could ever understand. You've got to be accepting of a moderate amount of chaos and be willing to roll with the whims of the crowd or loose their attention.
I try to be accommodating when a child wants to regale me with an anecdote about last night's bedtime or their halloween costume from two years past, but on days like today (when I have a bang up lesson planned) sometimes I just barrel through and don't stop to entertain comments from the peanut gallery. Sometimes this breaks my heart as a child sits dejected because I couldn't put my class on hold to give them the floor for another rambling tale of a new toy or a video game. Sometimes a simple thing like a child's obsession with everything locomotive stick with me and though I am outwardly leading a song, my brain can't help but ponder the eternal questions of youth.
For several weeks now I've been issued the command by a particular 3 year old to sing "Down By The Station" at each of our 3 weekly music classes. It's not a song I grew up singing, and it's not my particular favorite when it comes to songs about trains. Today I ignored the "request" and continued with my plans. While playing the djembe drum and leading the wee ones in a movement song, my mind was someplace else. This young man, who is so obsessed with this song, had a little embroidered train on the breast of his polo shirt which got me pondering, "Why are certain boys so enamored of trains?"
In my experience, there is a certain type that gravitates towards trains. I think there is an element of thrill seeking for those youngsters who love trains, fire engines, racecars and jets. The sirens and blaring engines both frighten and enthrall. There is power in learning about those things which startle and scare us at first, but trains are unique. I've seen children spend prolonged periods of time pushing a toy train around a circular track again and again. The rigid predictability, the steadfast adherence to a prescribed path echoes the desire of these certain students to control the chaos they sometimes see all around them. Perhaps we as adults just need sit down and play with trains every now and then when the world seems out of our control.
Kid Quote of The Day: "Nick I have a tummy ache!" ~Ava (age: 4) "I have a tummy ache too." ~Jazmine (age: 4) "Hey, I have a tummy ache too!" ~Kayla (age: 4) "I guess there's something going around," I replied, it's called a need for attention.
Posted by Nick! at 1:10 AM 1 comment:

For your consideration, I have a long overdue review of King Pajama and their recent release Something Sweet. 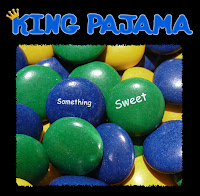 King Pajama is a duo from the Big Apple who offer their listeners a unique and jazzy brand of imaginative songs. Something Sweet has the unmistakable air of a New York cabaret act. I can imagine a crowd of preschoolers wearing berets and black turtlenecks sipping juice from martini glasses as they listen to songs like "Outer Space Boogie," or "Trip Around The World."
Lead singer, Nina Zeitlin, has a smokey, soulful voice and her harmonies conjure up hints of Manhattan Transfer especially on the title track. Jason Blechman, the man at the keys and composer/lyricist of all the songs on the album definitely stretches the concept of what kids' music can be. As a trained jazz arranger I found Something Sweet to be surprising and unexpected at times which is rare for the typical 3-chord sing-along fare of most kids music. The lyrics that compliment this progressive music are imaginative and sometimes silly. On songs like "Some Pieces" and "Time Goes" King Pajama dives into some common but puzzling questions that kids often dream up.

The Mike Brady Wrap-up: Something Sweet could quite possibly be the most unique album I have review here at Singing in the Bathtub. With that said it's certainly not for everyone. Listeners who enjoy showtunes, vocal jazz and rich harmonies will not be disappointed. Because of the complexity of the music, I didn't find myself singing/humming any of the tunes after the CD had finished. This is definitely not a sing-along kind of album. Equally, some of the lyrics might be on the verge of being too mature for the average pre-K listener. As a fellow musician I can respect and admire the work that went into this album. It's nice to hear a group that has a different slant on the concept of kids' music. A pop/rock, acoustic guitar driven album, Something Sweet is not, but a unique and jazzy album like this certainly deserves a listen!
Kid Quote of The Day: "Oh let me see your new glasses Mr. Nick," Mrs. Trescott, the teacher from room 13 asked, "Very nice!" "It makes you look like a GEEK!" ~Henry (age: 4)... how did he know that was the look I was going for? Though I prefer the term "Hipster-Nerd."
Posted by Nick! at 3:21 PM 1 comment:

Well, we're back in the Bathtub after an unexpectedly long hiatus. With the release of People, Places and Things in November, several Christmas concerts, an eventful trip to New England/Pennsylvania/Maryland for the Holidays, the third annual After-Christmas Concert at my mom's preschool (minus my mom who was in Atlanta on baby watch) and coincidentally the birth of a new nephew... needless to say, it's been a busy time.
It's fitting that it has taken me 'til the middle of January to make this New Year's wish, but here's to a 2010 filled with great music! With that said, I am excited to announce the return of a unique feature of Singing in the Bathtub that has been missing since the Arts Academy of Hollywood closed it's doors last year:
Classroom Album Reviews!
With the start of the Live! Kids program, I now have a new group of budding reviewers anxious to lend their views to the Bathtub's readers.To kick things off we'll be reviewing Bari Koral Family Rock Band and their latest release, Rock and Roll Garden. 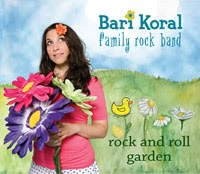 Art Work:
We passed the CD around so the students could get a good look at the pictures. They were attracted to the bright and cheery images immediately. "That's cute!" one four year old exclaimed as she pointed to the ducks and trees, "I likeded the duckie part," her four year old classmate added. Many people commented about Bari Koral's picture "I like the girl! Why she has flowers?" one of the students asked. We discussed that the "rock and roll garden" title might have something to do with it. One young man had a different observation, "I liked the Grandma!" I guess you can never be sure how they'll respond to the pictures (or how young Grandma's in South Florida can look!). "I like the girl, and inside, and outside, and the CD and the back," two of the girls said to make sure they'd cover all the bases.
Music:
The kids were up and moving soon after we started the CD. "That seems good!' a four year old dancer exclaimed as she bopped back and forth. "Nice," her five year old classmate added as he played the air guitar. "I liked the rock and roll part," another six year old commented. There was a great deal of dancing and moving around, but the lyrics caught their ear too (which is always a challenge!).
Lyrics:
After listening to Rock and Roll Garden only once, the students had already picked their favorite parts. "I like the "hey, hey" part," "I like the firetruck," "I like dinosaurs and firetrucks," there were lots of different ideas. "She said something cute," one four year old girl said in a sing-song tone. "It's musicy and funny," her five year old classmate replied. All in all, it got high marks on the teacher scale because it kept the kids' attention.
Influences:
I always love asking the students what each particular CD reminds them of. The answers usually range from the silly to the outlandish, to the surprisingly astute. Our newest and youngest student remarked that "It sounded like Twinkle, Twinkle Little Star." "It sounded like sweet songs," her sister added. As for the left-field commentary, the one boy in the group said, "It remindes me of Ten Little, We Will Rock You, Legos, Dinosaurs." Which I took to mean it had the sing-along appeal of Ten Little Indians, the rockin' edge of Queen, the fun of Legos and the dinosaur theme. In terms of astute our senior, 6 year old member said, "There was a s song by a lady. She sings for kids." She couldn't quite recall whom sadly. 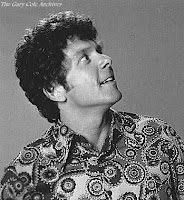 The Mike Brady Wrap-up:
(as a quick side note... I am so happy that the Mike Brady Wrap-up makes sense again!)
I enjoyed sharing Bari Koral Family Rock Band with my class this week. It's a good listen, and a well produced album. It has a "poppy" appeal and some beautiful singing that make it a sure bet for most people and families. The beat kept the kids moving, and the words kept them tuned in and occasionally laughing.
My review panel was between the age of 3+ to 6 and was mostly girls (just me and my one male student that day). He balked a little at the pictures but was the first to get up and bop around once the music started. The girls sort loved every bit. I felt the age range was ideal (though I could see toddlers enjoying B.K.F.R.B.), 'tweens who grew up listening to her might keep these tunes on their iPod, but they may not tell their friends. I would give Rock and Roll Garden a bit thumbs up, so give it a listen and see for yourself.
Kid Quote of the Day: "Um, Mr. Nick, do you know? Do you know who made God?" ~Joseph (age 4) "You know, that is a great question! Why don't you ask Judy [the youth minister]" I replied!