The Man in Black

There is a legend about a single evening of friendly jamming that changed music history. It was sometime around 1969 in Laurel Canyon (just outside LA) at a house where Crosby, Stills and Nash were staying. A casual party and jam session sprung up and before the night was over Joni Mitchell had debuted "Both Sides Now," CSN played "Suite Judy: Blue Eyes" for the first time, and Johnny Cash, the man in black, tried out a brand new song which he would play for the first time in front of an audience at San Quentin state prison, "A Boy Named Sue."
What is only slightly less well known is that the beloved children's poet Shel Silverstein penned the words to "A Boy Named Sue." It's not such a stretch when you think about it, but neither is the idea of Johnny Cash writing a children's album. This week my wife Tracey discovered that very thing on iTunes! 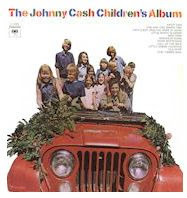 One cut from the album, "Nasty Dan," was performed by Johnny with Oscar the Grouch on Sesame Street. The album is what one might expect from Johnny Cash, straight forward, dripping with swagger, and a light-hearted bounce. Johnny even has his own "Dinosaur Song," though I'm pretty partial to my own Dinosaur Song (even if Joaquin Phoenix isn't jumping to play me in the movie!).

The Johnny Cash Children's Album delivers 15 tracks of good ole country blues. Any Johnny Cash fan should have this one in their collection. That's it from Singing in the Bathtub for now.
Kid quote of the day: (after being told by her mother to behave) "I am being have!" ~ Kate (age 2)
Posted by Nick! at 9:26 PM

What a find! Thanks so much for keeping this up, Tracey and Nicholas. I look forward to the "kid quotes", too.I shall have to keep my ears open for kid quotes from our world of preschool to share.