I enjoy watching a good football game, but I have never been into creating fantasy teams. I'm not knocking it, but it's not my cup of ginger ale (I'm not a tea drinker). Instead I've been thinking of creating a Fantasy Kids' Music League!
I'm thinking of two separate categories. 1) Fantasy  Backup Group, and 2) Fantasy Kids' Albums. The first boils down to this; my first album was titled One Man Band, and that pretty much summed it up. I played and sang on every track. Since then, I have had support from many great musicians in Boston and Miami. My family and good friends, but I have never truly had a band that could tour and put up with the strange hours that a children's musician works.
It's in this sense that I envy The Wiggles, not because I enjoy their music (to be honest I don't), but because they are (were?) four guys who shared a vision and supported each other. I think it was Paul McCartney who said "I can't imagine what it would be like to be Elvis. We've got the four of us going through this together, but he's all alone in this world." (I paraphrase).
Who would my ultimate backup group include? It's tricky. I wanted to shoot for the moon, but I also had to consider who would be appropriate in front of my typical audience. I also had to decide if I would include only contemporary musicians or all-time greats. Here's my list:
Fantasy Backup Group
Piano and Keys: Ben Folds 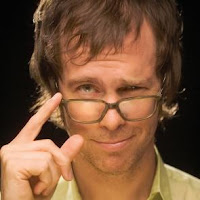 He's a dad which is a good start. He's an energetic performer and a great singer with a good ear for harmony.
Bass: Chris Wood 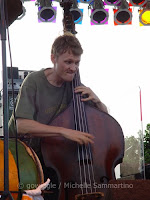 Chris is the "Wood" that keep Medeski, Martin and Wood afloat. He's got one kids' music album under his belt which is good. He can rock the upright bass and his "Paul McCartney" Hoefner bass as well.
Lead Guitar: Eric Clapton 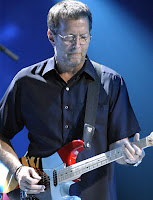 This decision was a tough one. Clapton is not by any means my favorite guitarist, but to be successful in In The Nick of Time he'd need to be a chameleon, and Clapton's done it all.
Saxophone: Joshua Redman 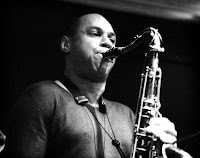 Joshua Redman is smart and talented (choosing music over law school). He's got great style and has been a vocal supporter of arts education. I wonder if he'd pick up a baritone sax for me every now and then?
Trumpet: Arturo Sandoval 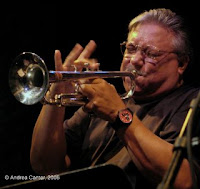 Arturo is a legend in South Florida. His club on South Beach is the place for live Jazz. Many UM students cut their teeth at Arturo's. I figure since I play a lot of Caribbean and Latin music, he'd be the best choice.
Drums: Brian Blade

Brian Blade is another amazing chameleon. The last thing I am is a luminary on the subject of the drum set, but I know when I see someone who plays it unlike anyone else. He's the session player of session players and has played with everyone from Norah Jones to Herbie Hancock (as when I first saw him at Lehigh University with my Brother Seth).
The second half of my list tonight was inspired by the many non-kids' acts who have been dipping their toe in our kiddie pool (including They Might Be Giants, The Barenaked Ladies and Medeski, Martin and Wood). Here are some folks that haven't yet tried this crossover, but I wish would:
Fantasy Kids' Albums:
Ben Folds
I really think he is the missing ingredient in the kids' music scene. I saw him perform live on a TV show called "Notes From The Road: Live from the Bonefish Grill." During an interview he mentioned that his daughter Gracie is a budding composer. I can imagine a great duet.
Patty Griffin
She captures a wistful nostalgia of childhood in songs like "Burgundy Shoes." She can tug at your heartstrings, but she can also wail! As long as there were some nice, impromptu snippets of her adorable laugh, this album would be kids' music gold!
Ok Go
For anyone who's seen the treadmill video, you can understand where I'm coming from. These guys are an indie-rock outfit that isn't afraid to look a bit ridiculous while they rock your world. I can only imagine what YouTube gems would come out of this venture.
Dr. Dog
These budding Philly rockers already have the right name. I was blown away by how much their lead singer sounds like Chris Cerf a la "The Opposite Song." They've got the energy and vocal harmonies that kids respond to.
Beck
Beck can definitely take his listeners to the far reaches of musical experimentation, but I think if he used his wild creativity to delight the smaller set it would be great. I have often admired and emulated his production styles (can anyone hear it in "Hang With Me?"). I bet the lyrics would be hard to decipher, but have you ever thought about the words to "Hey Diddle, Diddle"?
So that's the list and that's my challenge to these five! Go at it and make me proud. If you need a hand, I know a producer/song-writer who'll knock your socks off! You'll find me here at Singing in the Bathtub
UPDATE!
Today I received my first (two) album(s) in the mail for review. Wow, the blog-o-sphere moves fast! The Hipwaders, a trio from the left coast, sent me Educated Kid and their self-titled release for my students' and my consideration. Here's a video I came across on YouTube to wet your appetites:
There is something to be said for knowing your audience. A Paleo Pirate blends two powerful kid subjects (though I cringe at any implication that people and dinosaurs coexisted from a science perspective). Stay tuned for more on the Hipwaders.
Kid quote of the day: "I'm Jack in the box!" ~ Jack, while in a dishwasher box (age 3)
Posted by Nick! at 6:41 PM

Paleo Pirate was catchy and tuneful with the requisite repetitive chorus. The video was clever. Cute kids! I agree that most young boys would be drawn by two of their favorite play themes - pirates and dinosaurs, and I also share the concern about confusing them with the juxtaposition of pirates and dinosaurs. It's like when people put polar bears and penguins in the same stories and songs!

One year, I had a particularly "active" group during my F period class (F period is known to be the craziest period of the day...kind of like Friday the 13th all the time). Anyway, halfway through the year, I had a lot of kids who weren't doing their homework (this was around the beginning of baseball season). So, one day, I came in and told them that the whole math department was going to do a fantasy math class draft and I had decided to draft the entire F period class. We would be competing based on homework completion and test scores. For the next few days, the kids were all over their homework. Then we all forgot about it. But every so often, there'd be that one kid who would ask me how our fantasy team was doing. I'd always say we were in a race for first.
Love your blog Nick, even though I don't have too many occasions to listen to children's music.